LISTEN TO THE SONGS

The last video dedicatet to the song The End of Love

The first single Space Romantic of the ORANGEMOXIONS

The third video Soul Drive of the ORANGEMOXIONS

STATE OF THE NATION (cover)

The Band is composed of two artists who have lived the music of the 80s, becoming passionate about it through different paths. Discovering the same passion for electronic music, was born in 2013 the Orangemoxions project, also called OMX, with the aim of giving greater emphasis to the electronic music of the 80s, enriching it and reworking it with modern nuances.
The two protagonists, who met in a fortuitous situation, are Gary Withdown (voice and synth) and Andy Shots (synth, guitar, drum-machine and computer music), two pseudonyms studied artfully, as was used to do in the glorious years of Italo-dance.
Their music is based exclusively on the melody and the riff, where the effects of electronic sounds merge into some pieces with the sounds of guitar and piano; this to give the piece a wider dimension of the mere concept of electronic music.
Many sounds are reproduced by old synths, like Jupiter Roland, ARP2600 and a Minimoog, and some pieces dusted off by melodies created in the 80s, but never published.
The influences of the New Wave period, and especially of the Synth-Pop emerge strongly from their music, a return to the past but in a contemporary key.
The duo has already made twelve tracks. On May 11, 2018 the first video clip of the song Space Romantic will be released, the first step towards the completion of the musical project of the Orangemoxions, which will see the release of the first album on February 4, 2020. 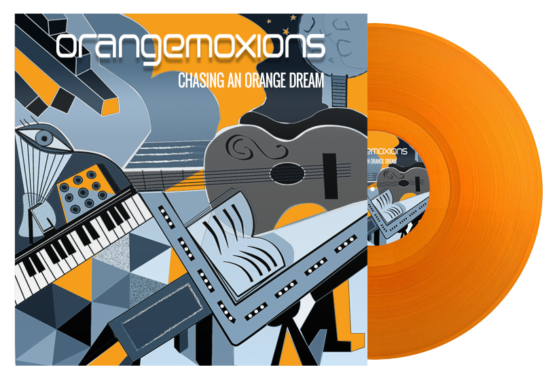 Book your limited edition album “Chasing an orange dream”.
Who buys the disc, we give the songs in mp3
Only 101 pieces, available to october 2020.